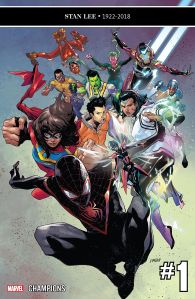 Having taken the last week of 2018 off (and the fact that there weren’t that many that had come out at the time), we are back for the new year of 2019 with two weeks’ worth of comic book news and reviews. Granted, it’s more like a week and some change with the new comic releases, but still. Aunt Petunia’s favorite nephew got married and the Immortal Hulk went to Hell (through a door and not in a handbasket). Marvel’s Captain America movies go to 4K and DC Comics’ Aquaman movie does okay at the Box Office. Wonder Woman 1984 wraps filming and the writer of the 1970s Wonder Woman tv theme song has passed away.

Agent_70 and Roddykat have questions about DC Universe Doom Patroller. And speaking of DC Universe, Season three of Young Justice is starting on Friday and there are two chapters of a new DC Universe exclusive comic book based on the show that has been released ahead of the show in tow.

The guys end the show with some pretty non comic book related news and start the show in a similar, but somewhat somber, way.

And get this, not one, but TWO weeks worth of #kliqsoftheweek!