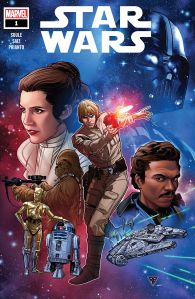 Happy New Year! It is hoped that everyone is finding the accommodations of this year, 2020, to be snug and happy filled, so far! It is NOT a long running primetime news magazine, that’s for sure(or is it?). If you want to find out how the first week of comics of the year fair, look no further than this episode! Agent_70 and Roddykat review books such as Star Wars #1, the new volume set after the events of Empire Strikes Back. That’s episode V, for you numerical folks. Hawkeye: Freefall and Thor both see a number one issues this week, as well.

On the news front, Star Wars: Clone Wars season 7 release date gets confirmed! The Lucasfilm Story Group strikes down a 20-year-old fan theory while a voice actor wants said theory to RISE! Another Black Widow trailer could be coming soon. Disney Plus might have found its Ms. Marvel but has definitely found showrunners for a couple of shows. CW Seed’s Deathstroke animated series gets a release date, and Birds of Prey won’t have Jarod Leto’s Joker. YAY! This calls for a round of #kliqsoftheweek! Hot and fresh!