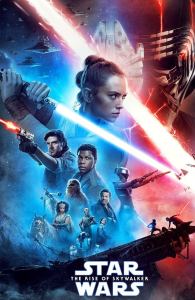 Welcome to the SPOILER-FILLED COMIC BOOK CHRONICLES TREASURY EDITION- STAR WARS THE RISE OF SKYWALKER! Listeners are reminded that there are SPOILERS FOR ALL OF STAR WARS, including but not limited to cartoons (especially Clone Wars and Rebels), Marvel Comics, and the Mandalorian.

@Agent_70 and @Roddykat discuss the final installment of the sequel Star Wars trilogy and discuss several parts of the movie that have proved to be divisive and have spurred deep and passionate discussions amongst the vast Star Wars fandom. That’s a polite way of saying that we had to hash out some stuff regarding this film, and how it affects the sequel trilogy as a whole.

We work through a good synopsis of the movie and talk about some of our favorite scenes, as well as some scenes that maybe did not work as well. We also have some difficulty figuring out what character had the best character arc within the sequels. Also discussed in detail: the big reveal of Rey’s heritage; Leia’s training, and her Master status; the shots fired by Rise of Skywalker apparently undoing parts of The Last Jedi; and Easter Eggs. We create our own Fan Fic in which we make a single change that leads to multiple changes in the sequels to hopefully make better stories. We wrap up our discussion with what might be next for Star Wars, and we rank our top five favorite Star Wars movies. We still have to have more time to let this film settle before we try to update our respective overall rankings of the Star Wars movie saga.

Remember, the Force will be with you always.