Since his debut in the World Wrestling Federation in 1985, The Macho Man has walked down the aisle to wrestle (ahem, I meant sports entertain) the 20 x 20 squared circle to that familiar tune. The Sir Edward Elgar piece was originally composed in 1901 as part of a larger composition known as March No. 1– but I’m not getting my degree in music, so that’s all the facts you’re getting from me. 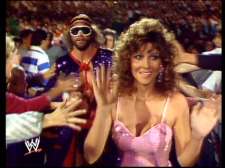 When I sit in that college auditorium today and wait to hear my name called, I’m going to constantly think of Randy Savage while his song plays. Without fail, every time I hear that song, I can’t help but point my finger in the air, spin around in a circle, adjust my oversized shades and let out a signature Macho Man “OOOOOOOOOOOOHHHHHYEEEEAHHHH!!”….
… followed by a rapid “DIGIT!” as I beckon Miss Elizabeth ahead of me towards the ring. Pandemonium among this capacity crowd as Macho Madness has taken over, and Pavlov couldn’t have conditioned a better response!

Babyface or heel, Macho’s association with this tune was everlasting, even with a few deviations during his switching of companies. In WCW, the familiar theme was re-done by The Mouth of the South Jimmy Hart, who added some guitar to it.

Of course, Savage went through a period where he joined the New World Order faction and entered the arena using their signature NWO theme. Then there was that time they repackaged him alongside Gorgeous George (the lady, not the pro wrestling legend) and he walked down to one of WCW’s weirdest late 90s metal themes ever concocted under the influence of Spicy Jalapeno Slim Jims.

Years after, Macho Man was for all intents and purposes out of pro wrestling. He had a great turn as pro wrestler Bonesaw McGraw in the original Spider-Man movie and even put out a rap album calling out his longtime nemesis Hulk Hogan.

But his legacy of Pomp and Circumstance lived on in the form of black wrassler Jay Lethal, who at the time was part of the TNA (Total NonStop Action) Wrestling promotion and was repackaged as Black Machismo. Lethal gave a phenomenal Macho Man impersonation and used the Black Machismo gimmick and retooled entrance theme (by Dale Oliver) for awhile, until eventually switching to parodying Ric Flair and eventually becoming his own man.

So yeah, it’s officially Pomp and Circumstance, but to me, it’ll always be the Macho Man’s theme. Even on Nintendo!