Recently featured on Eclectik’s site was an impressive look into the vast catalog of Cap’n Crunch cereals. Thinking back to some of the special edition cereals we had growing up, we couldn’t help filling our own bowls with all the cereals we could find! These are either special- or limited-edition cereals or cereals that were tie-ins to popular movies, cartoons, video games, comic books and toys. How many have you had?

Enjoy the slideshow and gallery! Be sure to leave us comments if you have any… 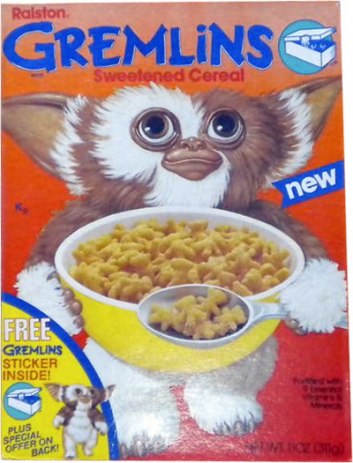 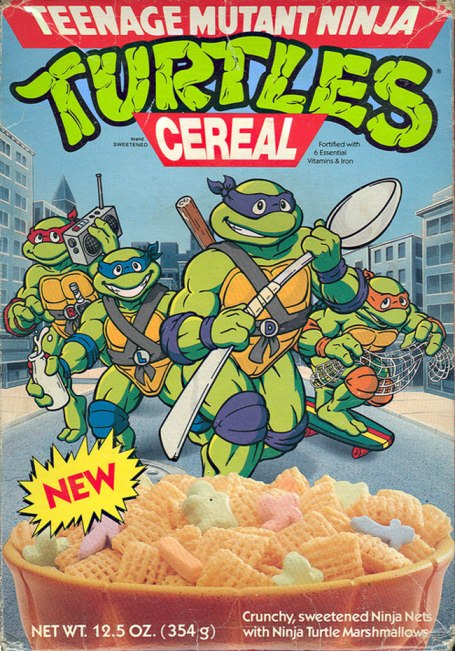 When Classick ate this cereal, he threw away all the non-blue marshmellows and yelled something about Leonardo leading…

Did not know G.I. Joe had a cereal. Again with the stars, how does this help me experience G.I. Joe, huh?

Mickey only peddled his crunchy wares North of the Border, where Simon from Die Hard With A Vengeance was hiding out.

Mistaaaaa T!!! This was actually a tasty cereal.

Never had this, but I’d imagine the flakes are pink, or they turn the milk pink or something. Sounds like an awful experience.

Popeye cereal came in bags in a variety of types. Sweet crunch was the best. 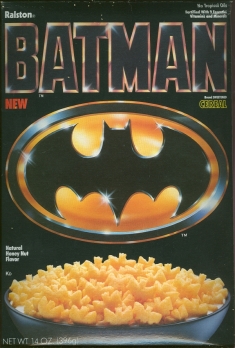 Basically a Cap’n Crunch variant for 1989’s Tim Burton Batman movie. If only they offered a limited edition Billy Dee Williams Harvey Dent mask on the back…

Another combo cereal, similar to boxes of Nerds candy. If only they just put the candy in the box instead.

The first of several Spidey cereals. Spider-man turns 50 this year. 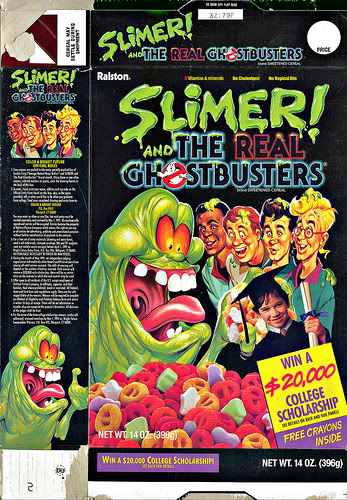 Another spin-off cereal, Slimer ended up being the “break-out” star of The Real Ghostbusters, forcing this cereal on the masses.

C-3PO’s belonged in the garbage mashers on the detention level. 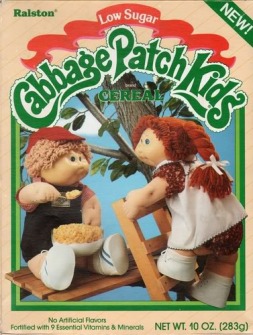 Not just a line of dolls and a victory dance, Cabbage Patch Kids had their own cereal. If only Garbage Pail Kids followed suit….

You KNOW you were down with the struggle if you ate “Prince of Thieves” cereal. Kevin Costner couldn’t even stick around to pose for the box photo, so they drew it on. 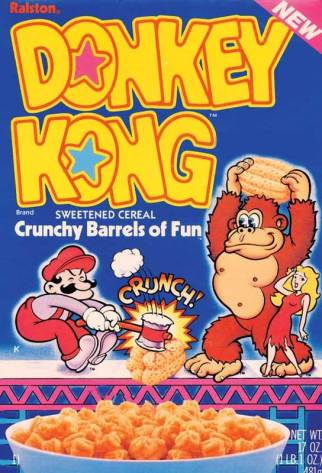 Donkey Kong took time out from enforcing Pauline’s restraining order on creepy stalker plumber Mario to give us this awesome cereal. 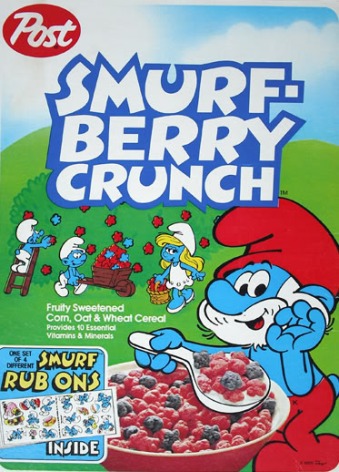 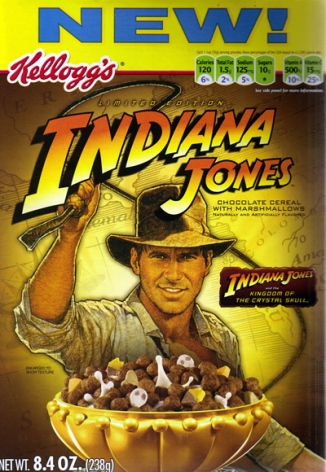 This was a 2007 cereal for Kingdom of the Crystal Skull, but the box art was pulled from Raiders of the Lost Ark. Guess 70 year-old Indy wasn’t moving units.

The world’s unfunniest comic strips were assembled together on a very unfunny cereal box. Not surprised no one’s heard of this.

Wheaties had to profit on the basketball slam dunk craze, but “Dunk-a-Balls”? Let’s not go there, shall we?

Crunchy stars? How original! Where are my Gretzky, Jordan and Tecmo Bo marshmallow shapes, huh?!!

Of all 80’s cartoons, you’d think Rainbow Brite would be perfect for a cereal. Hero to future activists everywhere.

This was an unreleased cereal. Would’ve been a great tie-in, but chocolate balls? WTF does that have to do with robots in disguise? 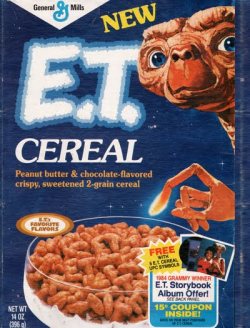 The worst video game ever made had to have come from the same franchise that gave us the worst tie-in cereal ever tasted.

Time to make the donuts! So much creepy goin on here. Blackstone and the Dunkin Donuts guy both giving me that predator eye? “Glazed Style”? Nah, son… 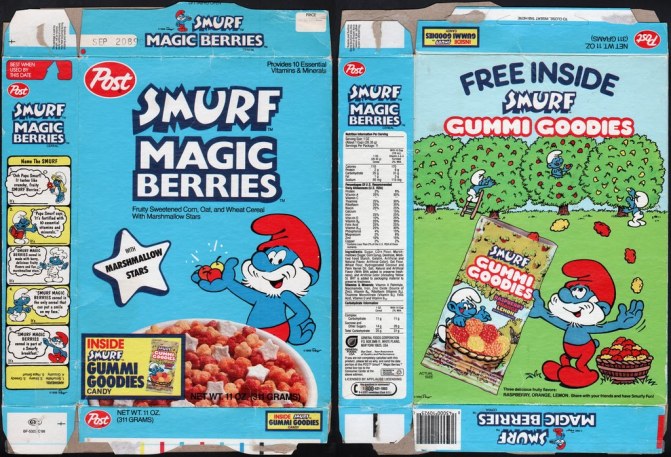 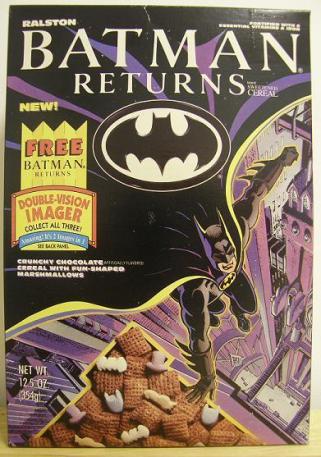 The Bat, The Cat and The Penguin. This cereal taste like it was made with parts from all three animals.

Tiffany’s is fully booked, so have breakfast with Barbie instead.

I’d imagine this was for the kids who watched Double Dare daily and roasted ants with magnifying glasses outside. 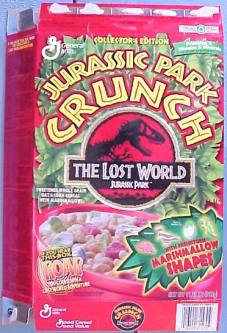 Jurassic Park skipped over the chance to put out a cereal for the first movie. Not so for The Lost World. 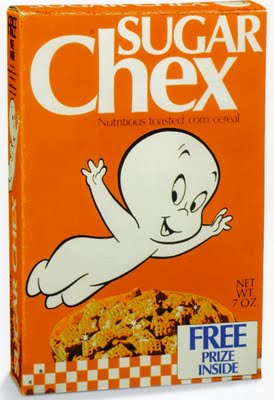 Chex had a sugar version that tied in with Casper the Friendly Ghost. This box had to be from the 70s.

Steve Urkel was at the height of popularity in the 90’s, so much so he used his cereal to campaign for the presidency 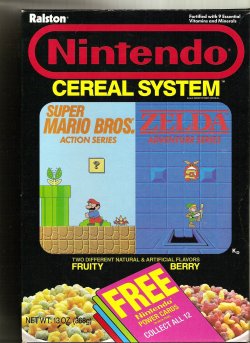 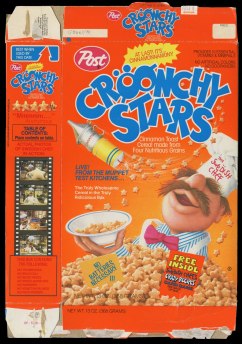 The Muppets’ Swedish Chef had his very own cereal…

Does this come with a Hot Wheels track inside?

If Frankenberry went through with the operation…