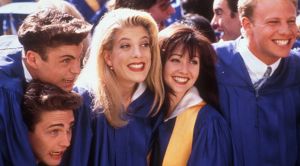 I will safely admit, I’ve never watched “Beverly Hills 90210” Although the Aaron Spelling-produced Darren Star-written TV series was immensely popular from 1990-2000, spawning spin-0ffs Melrose Place, Models Inc. & 90210, I never got into it. When it first aired, my first thought was “didn’t they already do this with that cartoon Beverly Hills Teens (1987)?” Among friends who watched 90210, I casually dismissed it as the night-time version of Saved By The Bell. And really, what did I care about rich kids from California anyway?

It wasn’t until years later, probably when I was regularly reading Bill Simmons’ Sports Guy columns on ESPN’s Page 2 (good ole days), that I came upon the words “Donna Martin graduates.” Basically the story was around the time of their senior prom, Donna (played by the first ever contestant of the Hot or Not? home game Tori Spelling) was found drunk. This prompted the school to revoke her high school graduation privileges, spurring her friends (Dylan, Brandon, Kelly, Slater, Jesse and the rest of the gang) and the rest of the student body to protest by not taking their final exams. The “Donna Martin graduates” movement swept the town. Eventually, the kids crash a school board meeting a la Lean on Me and plead their case, convincing the slimmest of majority of the board to reinstate Donna Martin’s graduation and address the dress code.

“Donna Martin graduates” was a more effective movement than Occupy Wall Street, but only because this is television and you have to solve this stuff in an hour tops. I never heard of this episode until the Sports Guy sandwiched it between references of The White Shadow and The Karate Kid. Honestly, I could have cared less if Tori Spelling graduated high school on time. But as I spent the last 16 months stressing, struggling, scrapping and clawing my way through college, I had adopted that phrase as my mantra….

Well, as of this week, hell the f**k yeah, I do. I have so many people to thank, but most of all, thank you, kinda hot in the right lighting and with enough beers maybe Tori Spelling!