This week’s assignment from The League of Extraordinary Bloggers comes courtesy of… ME!

That’s right, I donned my Cerebro helmet, twitched my nose and made Silent Bob Jedi hand-motions while dangling precariously from a game show scaffolding to convince the guys at CoolandCollected.com to use my momentary brain fart as a topic from which to blog of….

You open your own sports agency. Which pop culture all stars will be your first clients? “Show me the money!”

Look… if Jerry Maguire, Arli$$ and, most recently, Jay-Z can do it, why can’t we? 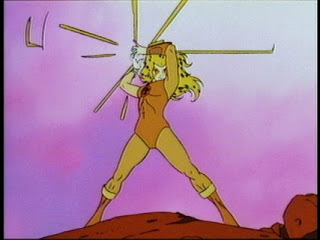 Known for her speed, athleticism, determination and beauty, Cheetara is a Thunderian noble who has saved the ThunderCats on many occasions with her quick feet and deft staff work. She would be a track and field superstar and blow away the entire field in both men’s and women’s Olympic events. Shelley-Ann Fraser Price? Carmelita Jeter? Child’s play!! And the endorsements? I’d make sure she’d sell a lot more than just kitty litter. She’d be a mega star and would also be the poster woman for our agency, given how similar her name is to our acronym (pure coincidence). Of course, we’d command our usual 13.5%, but it’s worth it, trust me!

Sure, he’s got some unresolved emotional issues, and yes, his relationship with scout/handler Al Percolo might get in the way of business, but have you seen this guy pitch? Or hit? Hell, he literally carried the Yankees to a 2-0 perfect game shutout win over the Ozzie Smith-led Cardinals in Game 1 of the World Series! Any Sabermetrician will tell you that 27 up, 27 down with 81 consecutive strikes and two homers is worth the stretch. Your kids will want Steve Nebraska special edition pop tarts and I’d have him endorse GE brand flood lights (given his propensity to hang out near stadium lights), among other products. And the Yankees? Well, Steinbrenner’s dead, so I’d have Nebraska sign with the Mets instead… for baseball reasons…

As I referenced in last week’s League post (check it here!), I would LOVE to see a return of The Bionic Six, with my pitch being they bring it back as a reality show. Two of the six would be targeted for my representation: multi-sport athlete Sport-1 or martial arts master Karate-1. Both brothers have taken an interest in the ever-popular sport of MMA and is vying to get signed to either UFC or Bellator so they can compete in the octagon for big money bouts. They train together, hang out together, tease their sister Rock-1 and their geeky brother IQ together and of course fight evil together, although Scarab has been in hiding for awhile now (plotting and planning his next move, perhaps?) But the thing is, CHTARA has room for only one, so for the privilege of hiring our services, both Bionic bros will have to duke it out… Highlander-style. The winner gets the contract, in typical WWF Superstars fashion! Let’s get it on!

Meant to capitalize on the popularity of the classic Namco arcade racing game, Pole Position the cartoon series brought us brother and sister duo Dan and Tess Darrett, who, “… LIKE THEIR PARENTS WERE…”, are members of a secret government crime-fighting operation under the guise of the Pole Position Stunt Show. Now that there’s no cartoon to report in to (it only lasted 13 episodes), I would help the former stunt driver and one-time carnival queen revitalize her career in NASCAR. Danica who?? Tess Darrett would knock her clean out the box. Sure, it might be a challenge getting complex AI component Wheels on board Darrett’s sponsored race car, but it’d be worth it to bring these two back together again.

Tess would not only wow them on the track, but she’d also take away Danica’s endorsements and appearances (Go Daddy? how about Go Darrett!) and add to them with some of her own (Covergirl, SI swimsuit calendar, Tango With Celebrities or whatever they call it…). Under our representation, if you want to be on top in NASCAR, you’ll have to be put through the “Tess”…

Willie Beamen (Any Given Sunday)

Watch the video, tells you all you need to know about why we’re signing this guy…

Star quarterback. Track star. Actor. Rapper. Pitchman for MetRx (“inflate yo chest!”). And he looks like the dude who played Ray Charles in that movie? Willie Beamen has all the tools, and we think we can snatch him away from his current agent (isn’ t that Duane Martin?)

Sure, he needs to regulate his diet a little better (that pre-game ritual of tossing his cookies on the field doesn’t score well with the housewives and moms demo), but as captain and star player for the expansion New Mexico Aztecs under the tutelage of inspiring coach Tony D’Amato, Willie is poised for super duper stardom. With CHTARA, we’d make sure that he gets maximum value for his talent and of course we’d get our 13.5%. Gotta go to work!

Well, there you have it. Why didn’t we go after Rod Tidwell, who broke Arizona records, went to Arizona State and wants Arizona dollars? Well, he’s got The Ambassador of Quan at his side, and we’re not going up against Tom Cruise… ever!

This post has been an assignment for The League of Extraordinary Bloggers , which is a group that is as awesome as it sounds.

Check out these other posts this week from around The League!

Do you have a blog? Interested in joining The League?  Details here!!