Welcome to another exciting edition of The KLIQ Nation’s Comic Book Chronicles!

On this week’s episode, we are joined by Donny Cates and Eliot Rahal, the writers of the upcoming Dark Horse Comics series The Paybacks!

“Heroism doesn’t come cheap, so when superheroes borrow money to finance their genetic enhancements or crime-fighting supercomputers, their debts make student loans look like IOUs! Enter the Paybacks, a repo squad composed of bankrupt former heroes here to foreclose on everybody’s secret lairs! From the team that delivered the acclaimed Buzzkill!”

We talk to Donny and Eliot about Buzzkill and The Paybacks, the superhero universe they’ve created for themselves at Dark Horse, and much more!

Then we will rundown the comic book news from the week, along with our picks for KLIQ of the Week!

This show is also available on iTunes, stitcher smart radio, or now on TuneIn radio! Subscribe to the “Cold Slither Podcast Network” today & tell a friend (or a foe)! 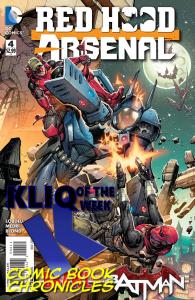