As I’m back to regular status with The League of Extraordinary Bloggers now, it’s time I dove into this week’s assignment… 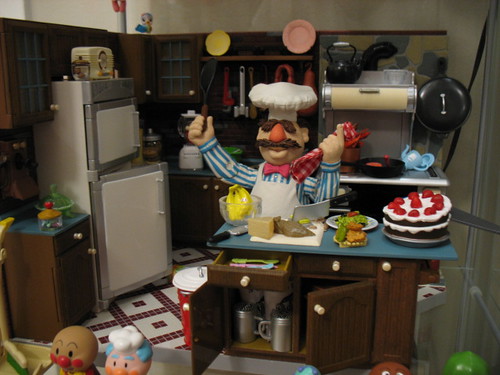 My first thought for this ultimate dinner party was… who’s gonna cook the food? Sure, I can hold my own in the kitchen, but I think it’s high time I just played host and not don multiple hats, so this dinner will be cooked and served by the one and only Swedish Chef!

He doesn’t count as a guest, mind you…

I want this dinner party to be lively and full of stories and conversation to fill all four course.

Here are the five guests I would invite:

This smart-mouthed sailor would have tons of seafaring adventures and tales of several exotic encounters from ports of call around the world to regale our partygoers with. Sure, he’s a womanizer and a bit of a schmuck, but between Davey Jones’ locker and Blow my Barnacles references, Shipwreck is the kinda guy who’ll make you laugh and maybe even cry from laughing so hard. I’d ask the Chef to set aside a plate of crackers for Polly, who’ll no doubt hang around and co-sign whatever Shipwreck says.

The world’s most inebriated mailman, Cliff has been looking for a place to hang out since Cheers shut down all those years ago. He’s not as good with stories as he is with anecdotes and fun little factoids and trivia that no one asks for. As the other dinner guests tell their stories, Cliff will surely interject with an aside based on a word or phrase mentioned. His mental library of uselessly useful information is at Ken Jennings levels, but I sometimes wondered why he didn’t go on Jeopardy to win the big dollars (correction: he did appear on Jeopardy!!). He’d be a good guest to have, provided no one tries to strangle him first.

Stories. He’s got ’em! Anecdotes. He’s loaded to bear! But when it comes to dinner parties, as ole Jack Burton would say… “What the hell?” The pilot of the Porkchop Express, this surly trucker played by Kurt Russell would give his personal philosophy on every subject mentioned by the other guests. A 1980’s John Wayne, Jack’s got a few stories of his own, like the time he and Wang rescued a bunch of green-eyed brides (including Samantha from SATC) from Lo Pan and his army of Mortal Kombat character prototypes. And given he drives the Porkchop Express, you have to assume he’s hauling porkchops, right? Swedish Chef can cook those with a fine apple sauce no problem!

This Southern-fried Kentuckian is known the world over for his glasses, cheap suits, tennis rackets and most of all his big mouth. James E. Cornette has commanded several rooms, auditoriums, stadiums and arenas, cutting promos as manager of The Midnight Express, The Fantastics, The Heavenly Bodies, The Dynamic Dudes, Owen Hart & Yokozuna, to name a few. Jim would have stories from over 40 years in the pro wrestling business, from ringside to the locker room and beyond. One of the best talkers around, Jim has worked for several promotions, including WWF/WWE, NWA/WCW, TNA, Ring of Honor, Ohio Valley Wrestling and he once owned Smoky Mountain Wrestling. He’s worked with everyone from Dutch Mantel, Dick Murdoch and Barry Windham to modern day stars like John Cena, Brock Lesnar and Batista. Jim would relish the chance to have a nice sit-down dinner cooked by a chef (even if he is a Muppet) because it sure as hell beats waiting too long for food in a Dairy Queen drive-thru.

No dinner party would be complete without a Saint Olaf’s very own Golden Girl. Rose Nylund would liven up the party because (a) half the guys there would want to hit on her, despite her age and (2) she has many a tale from the Norwegian town nestled in the heart of Minnesota to entertain the party. Rose would tell stories and spout Scandinavian Saint Olaf phrases that would steam up Jim’s glasses, curl Jack Burton’s mullet, wiggle Cliff’s mustache and raise Shipwreck’s sails to full mast (now that’s just dirty!). And she can bring the world famous problem-solving cheesecake for dessert.

Well, there’s my guest list for what’s sure to be the neverending dinner party. Do you like my lineup? I don’t care if you do, really.

I do care, however, that you check out other posts from around the League– check them out below and leave comments, won’t you?

AEIOU and Sometimes Why