Oh… did you think we meant the typical sappy lovey-dovey hearts, flowers & candy type of Valentine’s Day? Ohhhh  no, this ain’t no day where we recognize you couples in love out there… THIS day is a celebration of various awesome Valentines that have nothing to do with the sappy sentiment known as “love” — let’s celebrate today Cold Slither Style!!

UPDATE!!! Vote for your favorite Valentine in our poll!

Even though she’s a cop, Jill is also an experienced zombie slayer. Albeit overshadowed in the movies by Alice, Jill is the real hero of the Resident Evil series of video games and is no-nonsense when it comes to zombie-killing. It’s not hearts that we see, but S.T.A.R.S. whenever Jill’s on-screen. Jill is also a character in the Marvel vs. Capcom series of fighting games, most notably for her special attacks, which involve lots of weaponry from her arsenal and sending zombies and demon dogs to rip you to pieces. Not to be overlooked, either, Jill is played in the films by the lovely Sienna Guillory. Hi there! 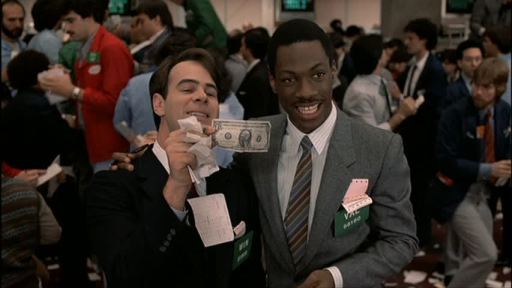 Arguably Eddie Murphy’s best role (apologies to Axel Foley, Prince Akeem, Sugar Ray, Sherman Klump and Norbit!!), Billy Ray Valentine didn’t steal the show in 1983’s Trading Places… he WAS the show! A Philadelphia con man who is roped in by the Duke Brothers in an elaborate experiment to remove Louis Winthorpe III from their firm, Billy Ray goes from rags to riches and eventually teams up with the suddenly downtrodden Louis to get revenge on the Dukes and arrange a non-stop gorilla conjugal for Clarence Beeks. Trading Places was also educational, as we along with Billy Ray learned of the intricacies of commodities brokerage and discovered that yes, you too can invest in pork bellies and frozen concentrated orange juice futures!

And of course, we can’t talk about Trading Places without posting our favorite scene… Beef jerky time! 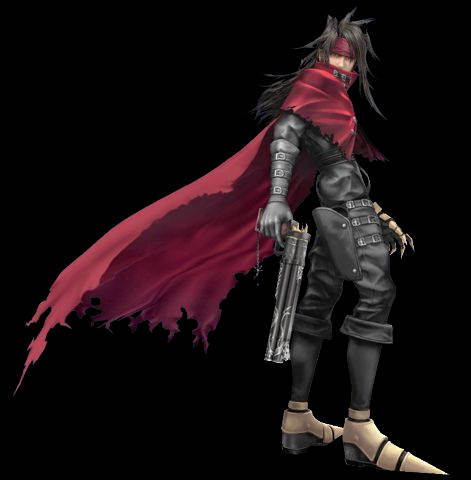 Not long after the debut of Sony’s original PlayStation video game console did Squaresoft release one of the greatest video games of all time – Final Fanasy VII. Like all of the FF’s before it from other platforms, this was a game with a story and characters totally separate from its preceding chapters, however what made this one of the best RPG’s ever, besides the unexpectedly shocking death scene (damn you, Sephiroth!) was the introduction of such cool characters. You played Cloud Stryfe, the weird looking spikey haired blonde with an oversized sword, but along the way you meet up with Vincent Valentine.

Vincent is an odd fellow, dressed in black and sporting a tattered red cloak and headband, his weapon of choice the Cerberus, a three-barreled revolver. In fact, all of Vincent’s weapons were guns, a bit of a departure from the swords and spells the other characters had going on (other exception, the gun-armed Barrett, but eh..). In the game, Vincent is found sleeping in a coffin in the basement of a Shinra mansion. It’s later revealed that he’s a former member of the Turks, an elite group of Shinra agents, but was later shot and experimented on. Vincent is now genetically enhanced and has the ability to transform into berserk monsters as his Limit Breaks in the game. This, my friends, was AWESOME!!!
Check them out…

This femme fatale with the whip-style sword is one of the most fearsome combatants in the Soul Calibur series, but we’ll let the video tell the tale as to why this Valentine rocks! Shout-out to our man eclectik, who is probably playing this right now!

Greg Valentine is a second generation wrestling legend, the son of Johnny Valentine. He trained in the legendary late Stu Hart’s “Dungeon” in Calgary in 1970 and went on to have a storied career in the AWA, NWA, WWF, WCW and various other independent wrestling promotions. Mostly known for his time in the World Wrestling Federation during the Rock’n’Wrestling era of the 1980’s, Valentine was part of one of the most hated tag teams in the sport, “The Dream Team” alongside Brutus Beefcake and managed by Luscious Johnny Valiant.

He was known as “The Hammer” for both his tough demeanor and in-ring style, which was hard hitting and in your face. His finishing move is the figure four leg lock, which, if he wore his protective shin guard while applying for ‘extra leverage’, proved devastating to his opponents. Ladies, what better way to celebrate a day of love than to curl up to some old footage of Greg “The Hammer” Valentine laying waste to a jabroni in the squared circle?

Check out The Hammer as he takes on Ricky “The Dragon” Steamboat in this vintage match! 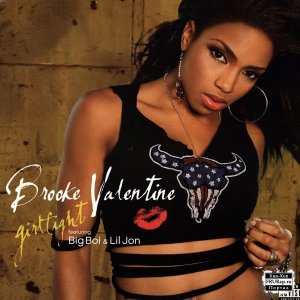 Sure, all we know her from is her hit single from 2005 “Girlfight” featuring Big Boi & Lil’ Jon, but damn it, ain’t that enough? 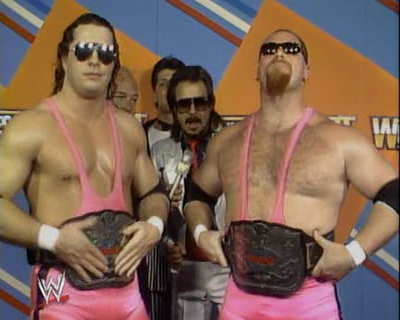 Did we miss anyone? Let us know in the comments!