“Aren’t you sick of being second-string? Titans began because we were all sidekicks. Just us kids trying to make a difference in our own right. We’re not kids anymore. And the J.S.A. and the Justice League can’t handle everything. With this, we can pull our weight. ”
– Arsenal

Since the first appearances of Robin, The Boy Wonder and Bucky in the 1940’s, comic books have consistently featured teenage sidekicks. Many grew and developed under the tutelage of their mentors. Some grouped together to form teams of sidekicks to go on their own adventures. Some graduated, eventually finding themselves filling the shoes of their mentor or even going off to create their own identity. And some died.

In the summer of  2003, DC Comics released Titans/Young Justice: Graduation Day, written by Judd Winnick and illustrated by Ale Garza and Trevor Scott. This three-part series served as the final chapters to the monthly Titans and Young Justice titles, which had already published their last issues that June.

Titans were a group of heroes featuring many of the original New Teen Titans all grown up: Nightwing (the first Robin), Arsenal (formerly Green Arrow’s sidekick Speedy), Troia/Donna Troy (formerly Wonder Girl), Tempest (fomerly Aqualad), Cyborg, and a few others (Omen, Argent, & Johnny Quick) had reformed the team in 1999.

Young Justice, on the other hand, were even younger than the Titans. Consisting of Robin (Tim Drake, the third Robin), Impulse (Bart Allen, later became Kid Flash), Wonder Girl, Superboy (Kon El, younger clone of Superman), and Empress (real name Anita Fite– get it?), Young Justice were the newer kids on the block. All teenage sidekicks of the A-list superheroes, the “Junior JLA” had several adventures in their initial run since 1998. Not only operating in the shadows of their legendary mentors, these kids also had to deal with the standard that the now Titans set during their run as teen sidekicks.

“Graduation Day” brings both teams together for a final, life-changing adventure that changes the make-up of both teams and results in a couple of heroes dying.

The series starts in San Francisco, where both teams are summoned by a company called Optitron offering to sponsor each of them. Despite its attractiveness to Arsenal, the sales pitch did not appeal to the Titans’ leader Nightwing, while Robin and Young Justice were still undecided. Before any contracts were signed, a purple female cyborg shows up out of nowhere and attacks, leaving a members  of both teams severely injured.

Turns out this cyborg is named Indigo and she is lost, looking for other cybernetic lifeforms to relate to. Indigo eventually finds and frees a Superman robot that someone (probably Lex Luthor, because he’s an obsessed dick), created and stored in hiding due to how dangerous it would be. Both the Titans and Young Justice arrive on the scene to fight Indigo and her new best friend Superbot– a battle that does not end well.

In the second issue, Omen, the resident psychic and oldest member of the Titans, approaches the Superman robot to sense his thoughts, he reaches out and snaps her neck, immediately killing her.

During a grueling slobberknocker of a battle in the third issue, the Amazonian Titan Donna Troy finally gains the upper hand on the Superman robot, beating him senseless, only to be pierced through the heart by the robot’s heat vision, which is deployed in a final act of desperation. 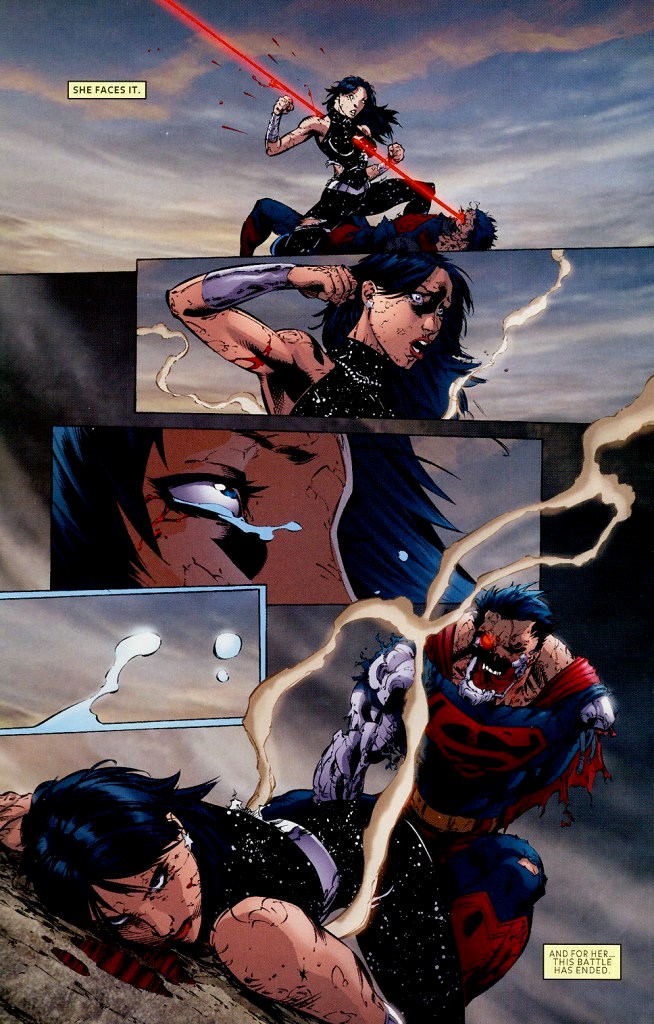 In the wake of two longtime members dying Nightwing disbands the Titans. At the same time, Robin, Superboy and Wonder Girl debate their place as a team, leading to the disbanding of Young Justice.

Both teams would return later in 2003 in some form, albeit under new names and with new rosters.

Nightwing and Arsenal start a new superteam, The Outsiders, taken from the name of a team that Batman once ran (see: Batman and The Outsiders). The roster included newer superheroes, including the newly freed Shift (a clone of founding Outsider Metamorpho) and Indigo (who had reformed for good, until she was later revealed to be Brainiac 8) among others.

At the other end, Cyborg had observed the argument that ended Young Justice and called the former members together to reform The Teen Titans, which included Robin, Kid Flash, Wonder Girl, Superboy and founding Teen Titans members Starfire and Beast Boy.

This series signified the “graduation” of these sidekick heroes to another level. For the Titans, it led to them dissolving and going off on their own, although the Outsiders marked a new chapter for some. For Young Justice, it gave them a more structured effort as Teen Titans, where they had the support of more experienced heroes like Cyborg and the funding of Optitron, which they did accept. Plus they had a cool T-shaped Titans Tower building in San Francisco. This Teen Titans line-up also inspired the DC cartoon series “Teen Titans”, “Young Justice” and “Teen Titans Go!”, whereas the rumored upcoming “Teen Titans” series that’s supposed to be on TNT is probably based on the original team (because DC Comics doesn’t care about continuity in their TV properties).

Troia and Omen were both eventually brought back from the dead (because this is comic books, after all), and both teams went through a few more line-up changes and revisions leading up through the recently rebooted New 52 universe, which found the Teen Titans still active with some of the same core members, but the Outsiders were now the name of a secret society of weapon totem clans featured in the Green Arrow comics. Nightwing himself graduated, spending a couple years as the new Batman until returning to his old identity again, then most recently operating as a secret agent under his real name, Grayson. Former Titans Arsenal and Starfire formed a team with The Red Hood (Jason Todd, the second Robin, not dead anymore)… Red Hood & The Outlaws.

While not the greatest comic book story ever written, nor the most classic, what Titans/Young Justice: Graduation Day showed is that not all graduations are happy occasions, even if they are necessary trials one must endure to move forward.