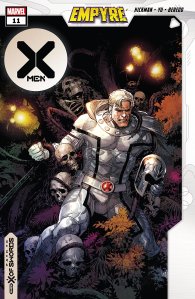 Comic Books. You love ‘em, we got ‘em. Agent_70 and Roddykat are once again back at you with another week of news, new release reviews, and views sure to delight, excite, engage, and enrage (probably). Daredevil Annual #1 sees ‘One More Day’. X-Factor #2 takes a trip to the Mojoverse. Three Jokers pay a visit to Batman and much more!

In the news, DC FanDome happened over the past week and there’s news from it in the likes of trailers and featurettes for The Batman, Wonder Wonder 1984, Suicide Squad and more. Rocksteady Games pits the Suicide Squad against the Justice League in an upcoming video game! There will also be a Gotham Knights video game whose trailer looks pretty good! There’s a trailer for the Snyder cut that might as well be the whole movie. Shazam 2 has a surprising and amusing cast addition. Milestone Comics is coming back in 2021 in mostly digital form (but hopefully also physical)! A potential future Mjolnir wielder has blinged out said hammer. 2021 will see a ‘very huge’ story for Marvel Comics’ Storm! #kliqsoftheweek don’t need another Hero, they don’t need to know the way home…

Comics reviewed this week include: