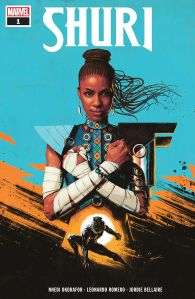 Agent_70 and Roddykat talk about the newly released, highly anticipated (by Roddy and others) Marvel comic Shuri #1. Maybe check that book out if you are so inclined. In news, Murder Falcon #1 gets a second printing. Was it due to the guys talking about it last week? Who’s to say (probably not, though), but Roddy probably hopes that happens for Shuri (Make it happen–Roddy). Marvel-Netflix’s Iron Fist gets canceled, and Avengers 4 and Spider-Man: Far From Home have wrapped up filming.

#kliqsoftheweek are again at their peak, so take a peek!