This week’s assignment from the League of Extraordinary Bloggers….

You are stranded for 10 years on a deserted island. You can take with you the following:
One food item (in a never-ending supply), one movie, one game, and one pop culture character.

Oh, the time-honored stranded on a deserted island question… let’s just say that I’ve mentally imagined several versions of this scenario over the years. For this line-up, I went with things that were either greatly desired or practical. As with most lists, ask me this same question next week and my answers may change…

(+ be sure to checkout the Atomic Geeks Podcast if you aren’t already a listener!) 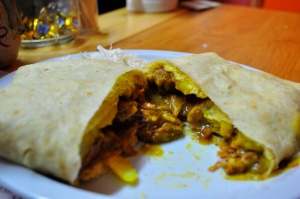 OK, so spending a decade on a deserted island means certain food items will already be accessible. I’m assuming there will be lots of vegetation and flora about, so I’m handled on the greens front. The occasional fish, shrimp and conch will also prove attainable, depending on my Castaway skills. So that leaves room for a food item that I would eat at any hour of the day and is not likely found anywhere in those confines. I go with a nice and filling curry goat roti, filled with rice, chick peas, potato. Hell, if I can get them to throw some spinach or callaloo in there as well, bonus! This is a West Indian dish that I would never turn down and hell, I’m on an island, might as well eat something from my heritage! If you’ve never had a roti, well think of it as the West Indian version of a burrito, only without the sour cream and guac. And even though you can have it with beef or chicken, I choose goat because that’s my favorite meat. Curried only, please, and it must be prepared by either my mother or some other West Indian mother.

Runners-up: Items from the Chick-fil-A or Chipotle menus, Ranch sunflower seeds, Pistachio nuts, any authentic New York pizza (not just “New York-style”, I want some Famous Original Ray’s or Original Famous Ray’s or Joe’s Pizza where Peter Parker got fired from in Spider-Man 2!)

A decade of a movie that I can watch any time I choose. I either assume I’ll have control of when this airs (A deserted island with a remote? How convenient!), however even if this movie were to air repeatedly on endless loop, I’d like to have one where I can jump in on any scene and enjoy. Starship Troopers is a popular ’90s sci-fi cult classic that furthered the careers of Neil Patrick Harris (making his comeback since Doogie Howser, M.D.), Denise Richards (fresh off showing her bits in Wild Things) and turning Casper Van Dien, Dina Meyer and Jake Busey (who later went on to star in Shasta McNasty and inherited Dad Gary’s signature row of madman teeth) into household names.

The story of an escalating interplanetary war between humans and an alien race of smart pseudo-arachnids from the planet Klendathu is one that I could watch from any point. Whether it’s Rico and Dizzy scoring touchdowns in high school arena league-style XFL rules football (which btw, should have its own video game) or the disturbing yet hilarious Federal Network propoganda spots that asked “Would You Like To Know More?“, I enjoy this flick and can survive viewing only it for another decade without flinching.

If I’m stuck on this island for ten years, I may as well have a form of entertainment with high replay value. What better game than an arcade cabinet (programmed with unlimited coins, most assuredly) of Konami’s Teenage Mutant Ninja Turtles? Based directly off the adventures of the 90’s cartoon series of the same name, this was THE TMNT game everyone played and wanted as the home version. Granted, the 1989 NES game wasn’t too shabby, but the graphics in this arcade version were fantastic and the sounds, voices and music that came straight from the cartoon made this an instant classic! I also chose this game because it’s multiplayer, meaning I could enjoy busting up Foot clan soldiers, mousers and Krang alongside the person in my next answer. If Gilligan and The Skipper happen to wash ashore Classick Isle (yup, I named it), they can jump on too for some intense four-player beat-em-up action! But I will ALWAYS get to play Leonardo (because, let’s face it… LEONARDO LEADS!)

This was a tough one, because I had two lines of thought here– do I go with someone I would love to hang out with and talk philosophy like Jack Burton from Big Trouble In Little China or do I consider someone who would eventually satiate certain… carnal… desires? (raises creepy dirty old man eyebrow). Considering we’re gonna be stuck on Classick Isle for ten years, I figure why not have it all? Velma Dinkley, the nerdy, orange sweater-clad helmet-hair wearing short girl from Scooby Doo would be my selection. Think about it!! She’s smart, meaning we can devise certain inventions and solutions together (solar panels to power a hot tub in the lagoon? Jinkies!). She’s clever and witty, so between the many viewings of Starship Troopers and playing TMNT, we’d have lots of jokes and stories to share. And sure, she’s not exactly Wife Pretty Hall of Fame–caliber in the looks department, but then again, appearances and orange sweaters can be deceiving…

This of course, assumes that Mrs. Classick has written off all hope of my survival and moved on like Helen Hunt did in Castaway, so yeah, Velma and I would be happy together. And who knows, I might even get the Linda Cardellini movie edition!

Considered, yet denied entry: Jack Burton, Robocop (just remembered he lives on baby food– meaning we’d have to grow carrots and stuff, then strain ’em– no thanks!), Valerie Brown from “Josie and the Pussycats” (a.k.a. my loophole for ten years with the Rosario Dawson movie version), Pai Mei (think about it– I’ll leave Classick Isle as a master swordsman who can rip out eyeballs who can accomplish the vaunted five-point exploding heart technique! But I’d probably grow tired of the constant blows to the head during training and might poison his fish heads one day, so….)

This post is part of the League of Extraordinary Bloggers.  For more info on The League, or to find out how to join, visit them here.

Also, check out some other deserted island desires from around The League!

Nerd Rage Against The Machine

Diary of a Dorkette