One of the most tragic deaths in pro wrestling/sports entertainment/wrasslin happened in the ring, but not from actual wrestling. Suspended high above the crowd Kemper Arena in Kansas City, Owen, dressed as “The Blue Blazer”, was descending via a harness in a superhero-like entrance at a WWF pay-per-view event called “Over The Edge”. That was on May 23, 1999. 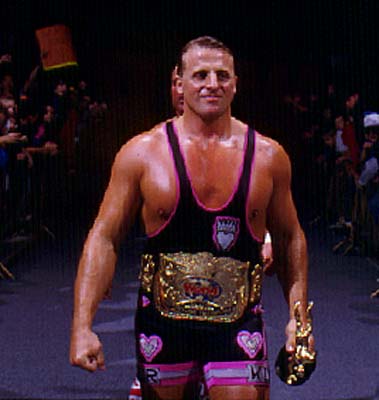 This post is to celebrate the life and legacy of Owen Hart. The younger brother of WWE Hall of Famer Bret “The Hitman” Hart and youngest son to Stampede Wrestling promoter and WWE Hall of Famer Stu Hart, Owen had a lot of bigger boots to fill and shadows to live under. But the youngest of 12 Hart children came out of Calgary, Alberta went on to ply in the family trade under his own name (and later as “The Blue Blazer”), achieving several accolades: 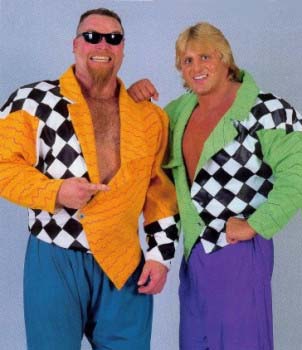 Debuting as “The Rocket” Owen Hart, he also faced off against and defeated his older brother Bret on several occasions, feuding with him in the mid-90’s in the WWF. He also partnered with him along with the other members of the Hart Foundation: Jim “The Anvil” Neidhart, “The British Bulldog” Davey Boy Smith and “Flyin'” Brian Pillman. The Hart Foundation had several feuds with Stone Cold Steve Austin, Degeneration X (namely “HBK” Shawn Michaels, Triple H, Chyna and Rick Rude). Hart was also on tag teams with Yokozuna and “Double J” Jeff Jarrett. After Bret left the WWE for WCW, Owen was off television for awhile and returned with the monikers “The Lone Hart” and “The Black Hart”. He would yell his signature catchphrase was “ENOUGH IS ENOUGH AND IT’S TIME FOR A CHANGE!”, taken from an in-ring promo he cut in which he turned heel, and changed from the old Hart Foundation pink and black wrestling attire to that of yellow and black in the fashion of a “Danger” street sign. Owen also at one point joined the militant pro-black “Nation of Domination” faction, teaming several times with “The Rock” Dwayne Johnson, “Kama Mustafa” a.k.a. “The Godfather”, D. Lo Brown and “The World’s Strongest Man” Mark Henry.

Owen Hart is considered one of the greatest pro wrestlers to ever put on ring gear. Emerging from the shadow of his older brother, Owen earned the respect of his peers in the sport and the adoration of fans worldwide. His death was a shock to many, a tragic and abrupt end to what should have been an even longer Hall of Fame-worthy career. Like his brother Bret, Owen’s finishing move was the Sharpshooter leg lock, only Owen would lead with his right leg whereas his brother used his left. Owen was also known for using the reverse piledriver (the move that broke Stone Cold Steve Austin’s neck), spinning heel kick, diving elbow drop, diving head butt, dragon sleeper, the leg grapevine, diving splash and moonsault. My all-time favorite Owen Hart move other than the sharpshooter was the leg-feed enzuigiri kick, where he’d put up a weak front kick that his opponent would catch, then cleverly whip around the other leg to kick the back of his opponent’s skull.

It is also with great honor that we instantly and posthumously induct Owen Hart into our WrassleCast Hall of Fame. 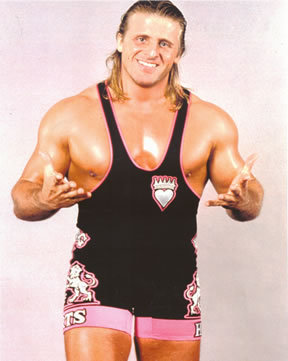 Thank you Owen. And no, you are NOT a nugget!