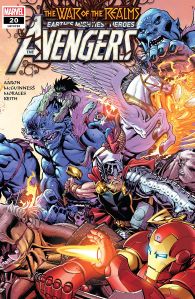 War. War never changes. For some people It even ends, such as it does in War of the Realms #6, which came out this week. Agent_70 and Roddykat give their thoughts on how it fared for them. Spoiler alert: They seemed to like it. Spider-Man Annual #1 revels in its Spider-Haminess. In other news, Spider-Man: Into The Spiderverse is on Netflix. You should watch it if you haven’t already. There is officially going to a sequel, according to one of the producers! Writer Donny Cates wants Keanu Reeves as Shang-Chi….yep.

The Mouse Guard movie has officially been cancelled, but there footage and the screenplay out there folks that wish to see them. Speaking of cancelled, Doctor Strange is ending at issue #20. DC Comics kills off their Vertigo imprint. And there’s a cool mobile app that Marvel comics partnered with that helps teach kids to read!

Note: Roddykat said Homecoming near the end of the show when talking about the new Spider-Man movie, but he meant ‘Far From Home’. He’s a doof, sometimes.  #kliqsoftheweek!